Don’t pick a champion just based on your lane matchup

Our analysis suggests it only explains up to 29% of the variations in champion performance.

Solo queue drafting 101: counter-pick your lane opponent. It’s a universal truth that having an edge in the laning phase is important. But you’re also told that you need to synergize with your team, and that you should consider overall team comps. More often than not, it’s impossible to achieve all of them at the same time. Which one should you prioritize, your lane matchup or synergy with your jungler/support/etc?

To answer this question, we need to compare the importance of matchups and synergies. Matchup win rates, a commonly used metric to identify counters, aren’t suitable for this task. They reflect not only counter and synergy relationships, but also each champion’s overall performance (for example, OP champions usually have all matchup win rates over 50%, which doesn’t mean they don’t have counters). It’s difficult to properly disentangle one from another. On the other hand, League PhD’s counter and synergy metrics are performance-neutral, and can be directly compared with each other in a 5v5 setting.

Today, we’ll look into the distributions of counter and synergy relationships in League of Legends. To give you a sense of what they are like, Figure 1 displays the distributions of lane matchups for top Fiora and Kennen. The analysis in this article is based on Plat+ solo queue games in NA, KR, EUW, and EUN on patch 11.1.

Figure 1. Fiora has a more spread out distribution than Kennen

The horizontal axis indicates the strength of relationships, while the vertical axis indicates the frequency. Orange dotted lines indicate the 10th and 90th percentiles, respectively. What we’ll focus on here is the width of a distribution (variance): the wider a curve is, the more a champion’s matchup varies by their opponent. Kennen, a ranged champion with somewhat hybrid damage, can safely lane against different types of enemies. Indeed, we see Kennen’s curve is a lot narrower than Fiora’s; he doesn’t punish or get punished as hard as Fiora does.

Let’s first try to make an educated guess for Fiora and Kennen. Fiora is arguably the best split pusher in League. Her win condition is not to join teamfights, but to have a strong split push presence; therefore, it’s reasonable to expect her lane matchup to be more important than overall team comps. On the other hand, Kennen has a safe laning phase and is heavily teamfight-oriented, so his lane matchup shouldn’t be as important as in Fiora’s case. 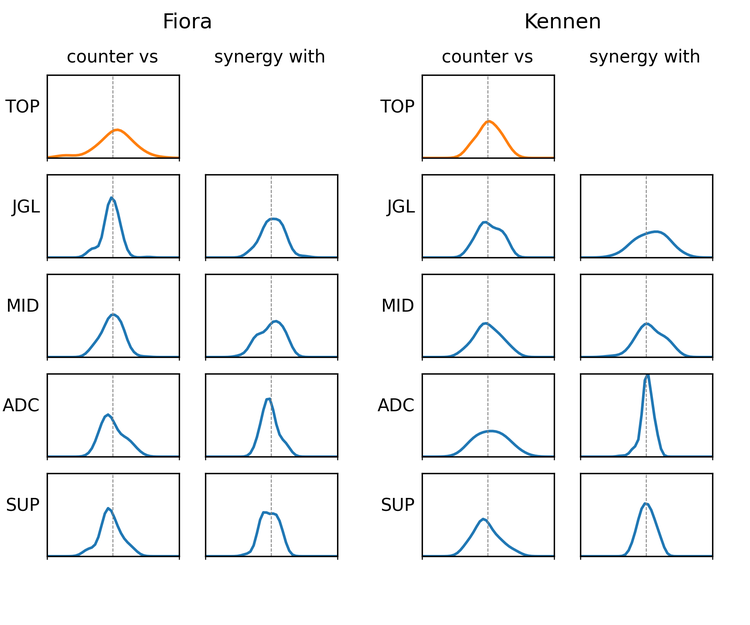 League PhD’s analysis confirms our predictions. Figure 2 shows all counter and synergy relationships for Fiora and Kennen. On the first row, the orange curves are the distributions of their lane matchups, which we already saw in Figure 1. Again we’d like to focus on the widths of the distributions; all graphs are drawn to the same scale.

There are two important takeaways. First, Fiora’s lane matchup is more spread out than her other 8 graphs, while Kennen’s is about the same. This is in line with our hypothesis above: lane matchup matters more to Fiora than to Kennen.

More importantly, however, even though Fiora’s lane matchup has higher importance, it doesn’t dominate her other relationships. Its distribution is wider, but not by much. This suggests, even for a hardcore split pusher like Fiora, team compositions still matter a lot.

Your lane matchup isn’t as important as you might think 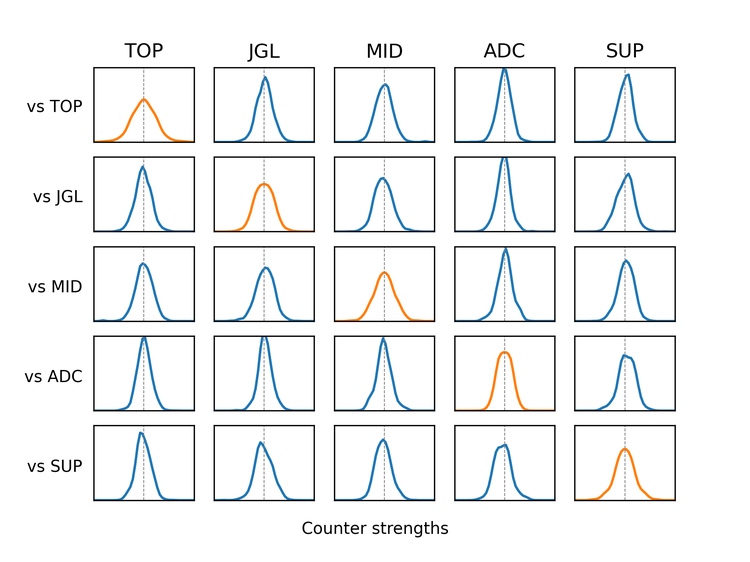 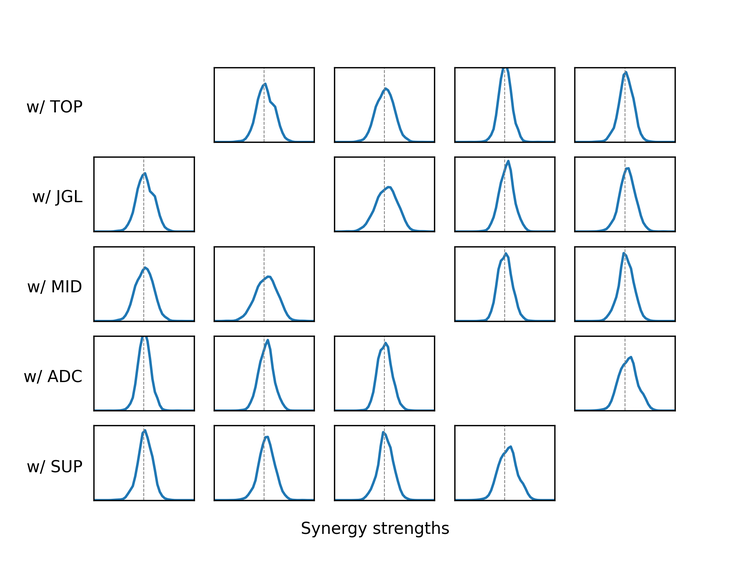 This also seems to be the case when the analysis is expanded to all champions. Figure 3-1 and 3-2 show the distributions of counter and synergy relationships for all champions. Orange curves are for lane matchups, and you can compare them with other graphs in the same column. They tend to be a bit wider than other matchups or synergies, but only very slightly so.

We can also come up with a numerical estimate under a simplifying assumption (of independence between other picks, which isn't too unreasonable). On average, lane matchups only explain 14% of the variations in champion performance. It ranges from as low as 5% to 29% by champion. Lane matchups tend to be more important for top laners (17%) and less for ADCs (11%); jungles, mids, and supports are at about 13-14%. In case you're curious, Fiora's is 25%, compared to Kennen's 13%.

In short, our model thinks that your lane matchup isn’t a dominant factor. Picking a champion just based on your lane opponent isn’t an optimal strategy, and you’d better consider overall team comps.

But that’s easier said than done. You first need to be knowledgeable of counters and synergies between all champions, and then make an optimal decision in a limited time frame. This is where League PhD’s Pick Now shines. It not only takes account of the champions that are already selected, but also all possible combinations of upcoming picks that might counter or poorly synergize with your champion.

Of course, you don’t have to take our words at face value. For example, since our analysis is based on solo queue games, it could be drastically different in team games with more coordination between players. If your team’s strategy is to play around a lane prio, a lane matchup could turn out to be very important. But for a typical solo queue game, our analysis suggests that your lane matchup isn’t as important as you might think.