Number of games to climb up a ranked division

How much does it help to have a 1 percentage point higher win rate?

All you need to climb up a ranked division is 100 LP, which corresponds to just 5-7 extra wins. But that journey often takes way longer than we expect. This is probably due to the planning fallacy: “a phenomenon in which predictions about how much time will be needed to complete a future task display an optimism bias and underestimate the time needed,” according to Wikipedia. Perhaps, having more realistic expectations can make your climbing less frustrating.

In this article, we’ll investigate how many games you need to play to climb up a ranked division in Season 11 League of Legends. In theory, it’s possible to derive the true expected value using Markov chains, but to make our lives easier, we’ll instead resort to Monte Carlo simulations. In other words, we’ll simulate the climbing process many times to estimate the number of games needed. This article was inspired by similar approaches in other settings like Hearthstone and MTG Arena.

Here are the details for the simulations:

This setup is to replicate the climbing process reasonably well, while keeping things not overly complicated. Each win rate is simulated for 100,000 times. Let’s first take a look at the scenario for even LP gains. 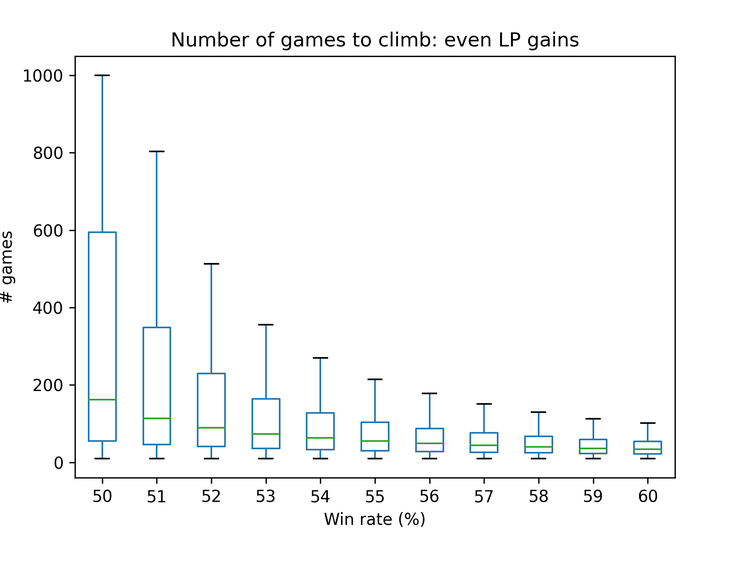 Figure 1 displays the boxplots for the number of games to climb by win rate. Note how fast it decreases as your win rate goes up. For example, the median goes down from 114 games with a 51% win rate, to 90 games with a 52% win rate. Assuming it takes 30 minutes to play a single game (average match length + queue times), this corresponds to a difference of 12 play hours! Marginal return of a higher win rate seems to be diminishing, but the point still holds: improving your win rate just by 1 percentage point makes a huge difference in the long run.

One more interesting observation is that you can still climb even with a 50% win rate. You just need to be “a bit” lucky, although the process will be very grindy. The median number of games is 162. Even after 1,000 games, there is a 14.3% chance that you’ll never reach Diamond 4.

Now, let’s move on to the second scenario where you have more favorable LP gains: +20 for a win, -15 for a loss. This typically happens when your MMR is considered higher than your current tier/division. 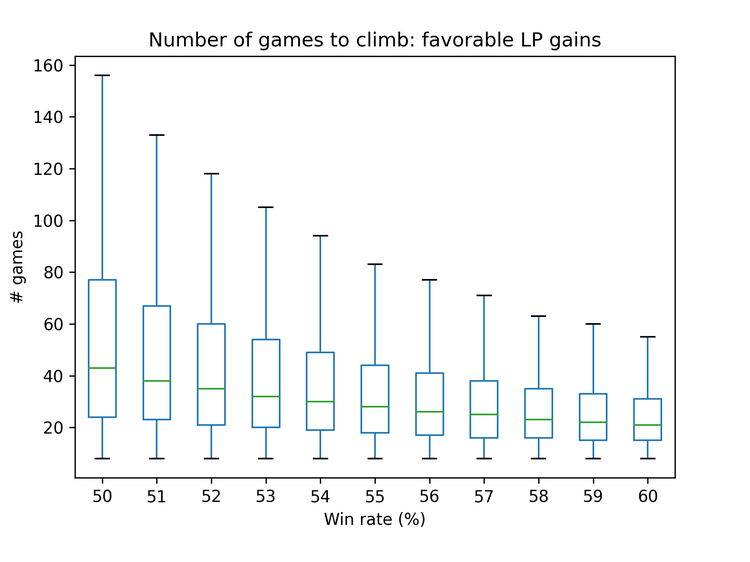 What are the key takeaways from this exercise? First, climbing the ranked ladder is supposed to take time. Even if you win 55% of the time with favorable LP gains, you will likely need to play 20-45 games (10-23 hours) to get promoted. If you’re winning less often and getting less net LP, be prepared for a long grind of 100+ games (50+ hours). Depending on how often you play, this could be as quick as a couple of weeks, or take up to a whole season.

At the same time, keep in mind that even 1 percentage point difference in your win rate matters. Especially if your win rate is close to 50% and your MMR is about the average for your tier/division. You need to squeeze every last drop, but the question is, how? Obviously, becoming a better League player is the way to go, but, as we all know, that’s not easy. It takes lots of time and effort to improve your skills beyond a certain level.

In contrast, there are other aspects of League that are more cost-effective to improve on. Proper itemization and runes are among them. Counter-picking is another one. As long as you have more than one champion in your pool, there’s a room for optimization of which champion to play. Anyone can make use of it by consulting the right resources; for instance, focusing on your lane opponent barely seems to help, so you’d better pay attention to overall team comps.

Another insight is that the amount of LP gains and losses has a huge impact on how fast you can climb. The difference in the number of games is very significant between the two scenarios. This is probably why some say dodging games can help you climb faster, since you only lose LP, not MMR. It isn’t clear how your LP gains are tied to MMR, but there’s a well-known rule of thumb: avoid loss streaks at all costs. When you feel tilted, stop playing and take a break.

These introduce the problem of quality versus quantity. Some level of grinding is inevitable for climbing the ladder. But if you keep spamming ranked games to the point where you no longer perform at your peak, you may not only lose LP from unnecessary losses, but also undermine your long term progression. Not to mention the frustration from not being able to climb faster.