Which champions are good first picks?

First Pick Strength gives you a better insight on first picks than a simple win rate.

"Match found!" As you click the blue accept button and join the champion selection lobby, you find yourself, to your dismay, at the top of the blue side. Timer starts ticking, and after 20+ seconds of mindlessly scrolling up and down the champion list, you end up locking in [champion]... only to regret a couple of minutes later.

Sounds familiar? A few years ago when the pick order used to be based on your elo, you could at least get to pick your favorite lane first. But these days, for any serious League of Legends player, it's the last place you'd want to put yourself in. Meta picks will be uncontested, but your enemies get to counterpick you, while your teammates somehow end up with champions that have anti-synergies with yours (seriously, Yuumi with Kalista?). On average, everyone has to first-pick in 10% of their games, so making most out of it can certainly help you climb ranked.

Win rate is okay, but not great

What many of you have surely done is to go to your favorite League statistics website and sort champions by win rates. Don't get me wrong, win rate is a simple yet excellent indicator of champion performance (keep in mind, though, that some websites might have it wrong). However, all champions are not created equal: some have build and play-style diversity to deal with different types of champions; others, while effectively nullifying a certain kind of champions, are destroyed by another. The main issue with using a win rate is that it indicates overall performance, which isn't necessarily equal to first pick performance that we’re actually interested in. The former should be closely correlated with the latter (more on this later), but we are still comparing apples to oranges.

An alternative then is a first-pick win rate: how often a champion wins as a first pick. We no longer have the apples and oranges problem, but data becomes a lot more scarce; every game has only one first pick, so we end up using just 1/10 of the available data. Some champions are rarely picked, and even more rarely as a first pick. In this case, a simple win rate is likely to be misleading. Moreover, it tells you nothing about the riskiness of a pick - people are generally more interested in avoiding the worst case scenario (you become absolutely useless during the entire game) than maximizing the chance of completely stomping your enemies.

So how can we go beyond a win rate but not suffer from data availability? League PhD's First Pick Strength takes a somewhat more sophisticated approach to solve this problem. For each champion, it evaluates not only their first-pick performance on average (similar to a first-pick win rate), but also how bad their matchups can get (riskiness). Let me walk you through how this magic is done.

First, the algorithm estimates the frequency of each enemy and ally champion to be picked into your champion. These estimates are based on actual data, and thus take account of the possibility of multiple roles. For example, if you are first-picking Shen support, you're less likely to be countered than when you're first-picking Janna support.

One crucial assumption to circumvent the data availability issue is that picks made into a non-first pick are as likely to be made into the same champion but as a first pick. This doesn't sound too unrealistic; if Malphite top is frequently picked as a teammate for a second-pick Yasuo mid, you expect to see him often too with a first-pick Yasuo mid.

Second, it analyzes every possible combination of ally and enemy champions. Counter and synergy relationships identified by League PhD help immensely here; unlike pairwise win rates you can find in other websites, the numbers on League PhD are designed to be interpreted in an actual 5v5 setting. By ranking the scenarios from worst to best and taking account of their likelihood, the algorithm identifies which champions are safer or riskier first picks. For example, it can identify champions which are:

Finally, to help with easier decision-making, the algorithm produces a composite index, called First Pick Strength, on a scale from 0 to 10. It specifically looks at two aspects: a) how well the champion performs as a first pick on average, and b) how bad enemy and ally team comps can turn out to be. It puts more weight on bad scenarios than good ones; you'd rather want to prepare for the worst than to hope for the best.

Results at a glance 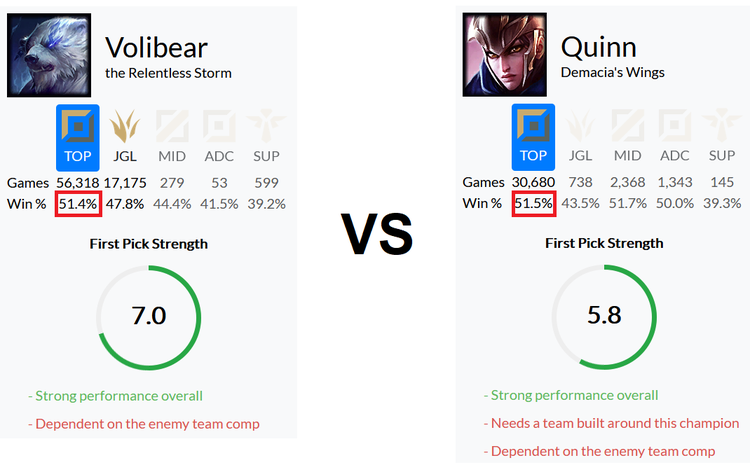 As commonly believed, support and jungle champions tend to have higher scores, whereas top and mid seem to get more punished for first-picking. Champions with higher win rates are generally great first picks. As we suspected earlier, when little to no information is available, win rates are a strong indicator of first pick performance. But as more champions are locked in and team comps begin to form, counter and synergy relationships between champions start to matter more - Pick Now's real-time champion recommendations can help you here. (FYI: Pick Now's recommendations are based on the same algorithm that First Pick Strength uses; even better, it also takes account of the bans and picks, so check it out for more complete analysis!)

Back to the example of Shen support: he might be able to confuse the enemy team, unlike support-only picks like Janna. But that's not the whole story. Maybe her overall performance is simply a lot stronger. Maybe her synergy picks are in the meta. The algorithm evaluates your options in a holistic way, and will recommend one over the other. This is the goal of League PhD's analysis: to provide you with the right statistics to maximize your chance of winning in the pick phase.